What the pedal steel fraternity made of Demola Adepoju, when King Sunny Adé and his African Beats first toured the U.S. circa ‘82, remains the stuff of conjecture. Demola was not your standard issue Nashville session guy, this much was certain. He was black. He played barefoot. He didn’t use a volume pedal, though he did use lots of signal processing. Sitting at the side of the stage, nodding his head in a near-somnolent state, he’d occasionally tear off reverb-drenched solos whose individual notes sounded like so many comets passing near Earth’s orbit. Demola was the type of pedal steel player (the late O.J. "Red" Rhodes, featured on Michael Nesmith's solo lp's, being another) capable of transforming a C&W cliché into a rural synthesizer.

Olufe-Mi is the only solo lp by Demola Adepoju of which I’m aware; this is the only copy I’ve ever encountered. Its four tracks could be thought of as Nigerian juju in chamber format (well, except for “Igba Aiye,” which sounds like a reggae cover of a Mac Davis song), with a very few players simulating the impact of Adé’s much larger band. That band had dissolved by the time of Olufe-Mi’s release in '85. Class act that he was, Adepoju still thanked King Sunny in the liners for the latter’s ‘Golden Advices.’ He also thanked Roger “One Take” Steffens, founding editor of The Beat, perennial M.C. of Los Angeles-area reggae shows and prime mover on the Bob Marley postmortem lecture circuit.

In the '80s, Demola Adepoju toured & recorded with the African Beats, played on Paul Simon’s Graceland album and was accorded a sidebar article in Guitar Player magazine. He lived and performed in the D.C. area for a while, post-Adé, before being turfed out of the U.S. on visa grounds. I have no idea of his activities during the past fifteen years. I hope that he’s doing well, as he deserves that much, if only for having made this most impressive album.

TECHNICAL NOTE: Ordinarily, I attempt to excise the scars of overplayed vinyl manually, drawing out the clicks and some of the distortion inherent in elderly microgroove recordings with the help of the pencil tool in Pro Tools editing software. Our last posting, Private Line, required several evenings’ worth of eye-crossing attention and the whole thing began to feel less like a labor of love and more like a morning paper route in winter. Then I scrutinized the sole copy available of Olufe-Mi, which had obviously been played with a darning needle for many years prior to finding sanctuary in an audiophile’s archive. For a day, I inhabited despair. A close friend, who has saved my sanity on more than one occasion, suggested the Restoration plug-in bundle offered by Waves. This suite of TDM plug-ins allows very nearly complete removal of the scar tissue common to decrepit vinyl. Olufe-Mi was my trial run with these tools and I’m pleased to report that they work without eliminating music, when used in moderation. Like that impulsive kid in the NRBQ song who discovers caution at the last moment, I will live to climb again.

I'll probably do a line of No Condition Is Permanent t-shirts, too, should demand warrant same. Yes, I'm hinting here, people.

Bootsdafa said…
This is amazing stuff - thank you so much for sharing all of this great music. I'll be back every day.
7:19 AM

count reeshard said…
Thank you. Probably every three days would be the best prescription, just so you don't get frusticated and think I'm letting the side down. Next up, King Sunny Adé's Maa Jo, then off to the Caribbean for a few posts, before returning to Mother Africa.
3:14 PM

Anonymous said…
Incredible!!! In the 80's I collected a lot of Zairian soukous and Nigerian juju. The 'Idie'-record of Pablo Lubadika Porthos is one of my favorites. To hear the enjoyment, the guitars swirling round the mellow voices. Those four songs are just great. Other memorable records at that time were Bopol Mansiamina's 'Samedi Soir', Pamelo Mounk'a great record 'Samantha' and Petit Poisson 'Bayini Ngai'. But at the time there were many, many good records. Don't forget Franco and Tabu Ley Rochereau commitment in 'Ngungi'(the tremendous L'Evenement - A Paris' record). Franco made the best soukous in the 80's until his sad death in 1989 (october 7th). I've seen him in Holland once and it was great.

King Sunny Adé is my great musical hero since the Island 'Juju Music'-record. I've collecting his European and Nigerian records since then. 'Bobby' is one of the most powerful records he made. Like 'Ja Funmi' this record is mid tempo, but with such a glorious drive. Fantastic. Other juju-musicians with great potential: Segun Adewale (I like his 'Adewale Play For Me' record on Stern's very much), Dele Abiodun and of course Ebenezer Obey. It's a pity that it's hard to get any jujurecords (except Sunny Adé) in Europa easily.

Count Reeshard, your weblog is so great, I can't hardly wait the next entry. With great R.E.S.P.E.C.T. - BoengLoekB, The Netherlands
12:32 PM

Anonymous said…
would you be so kind as to repost the recording? i was blown away by King Sunny Adé & His African Beats records and would love to hear this one by pedal steel guitar player Demola Adepoju. thanx in advance from argentina.
8:27 PM

contemporaryafrica said…
Can I bet you to please repost this file. I have looked for it for many years and it was a thrill to hear that
you have a copy.
7:52 AM

count reeshard said…
If you scroll down on the latest entry for the site (update coming today / 7-6-06!) you’ll find the active link for Demola. I'll be updating individual pages as well, but the active link may be accessed immediately on the Lijadu Sisters entry. Thank you for your interest,

You mentioned the LP is hard to find.

Do you have a full picture of the album cover you can share?

bwana said…
terrific site!!! if you do the t-shirts, i'd be interested in swapping (have some Sun Ra, Muslimgauze, Burroughs/Gysin shirts printed on silk-screen method)- peace!
12:50 PM

Anonymous said…
Thanks Count for the eclectic mix. Ive been on an "African Gtr" kick as of late and have been wading into Sir Victor Uwaifo, King Sunny Ade and any of the newer Tuareg groups like Tinariwen or Terakraft. The Adepoju is a great early Xmas gift.
5:24 PM

Anonymous said…
Arrggh!!! I'm burning a CD for a pedal-steel player of King Sunny Ade stuff, I found this webpage of solo album by Demola Adepoju, and now I'm crushed cuz the d/l link doesn't work. now I GOTTA HAVE IT! Somebody help please...
8:47 PM 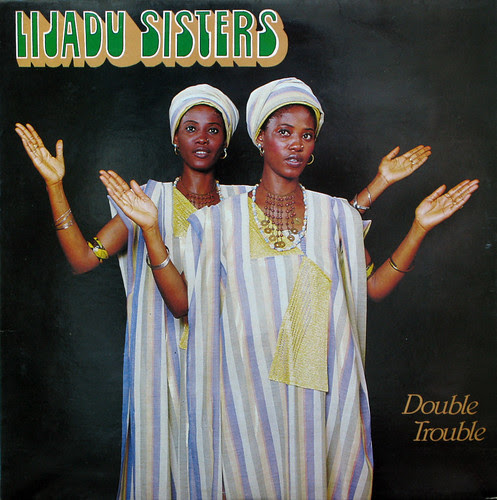 I’ve been absent from the blogosphere for something like the duration of a comet’s orbit, so today’s post is an effort to make up for lost time. Thus, a pair of records are featured, being the first two solo efforts by expatriate Nigerian drummer Gasper Lawal. Both embody every motive behind my (admittedly sporadic) commitment to this journal:

• Neither album has appeared on CD in the quarter-century since their release. “Kita-Kita,” from Ajomasé, turned up on the epoch-marking Nigeria 70 compilation assembled and released by Afro-Strut, a label whose demise I still lament. The combined running times of Ajomasé and Abio’sunni outdistanced the storage capabilities of the compact disc; it’s doubtful that either title was sufficiently popular to justify re-release in its own right. Fortunately, downloading now renders the timing problem moot.

• Both albums are filled to the brim with great playing and terrifically modern ideas (Lawal, with his 1980 debut Ajomasé, might have formulated the …